It is the duty of City Council to spend the taxpayers money wisely. It is also the duty of City Council to ensure that it gets maximum value for the contracts it enters into and the licenses that it grants. This week I have read about two possible instances where City Council has failed to tender contracts – failing to give taxpayers the value that it should. I emphasize that I have not independently verified this. Nevertheless, these fact situations are interesting:

1. On Monday May 10,  2010 the Globe and Mail reported that the City of Toronto has failed to tender the license that allows the “Boardwalk Pub” to operate.

“For more than two decades, the owner of the Boardwalk Pub has enjoyed a monopoly on food and drink sales on the eastern beaches, the waterfront jewel that stretches from Woodbine Beach Park to the end of the boardwalk.

Now city council is poised to extend that arrangement until 2028 – without competitive bids and with sweetened terms, including the right to hawk merchandise on the boardwalk, sell booze in Ashbridge’s Bay Park and pay $50,000 less in annual rent than city council asked for more than three years ago.

That is, unless a simmering movement to kill the deal prevails at city council this week.”

2. On May 12, the National  Post reported that Rob Ford made the following comment during the May 11, 2010 debate at OISE: 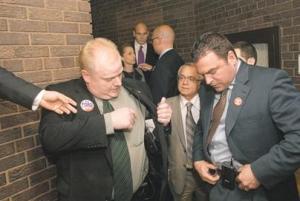 “Asked last night where he would find $200-million to give subsidies to people on a waiting list for affordable housing, Mr. Ford responded that would be “simple.”

http://www.nationalpost.com/news/canada/toronto/story.html?id=3015478
These are issues that the next City Council must consider.
Update 1: July 15, 2010. It is interesting to see that Montreal has tendered the contract to build its new subway cars.
Update 2: July 15, 2010: Shed no tears for Bombardier. They have been awarded the contract to build new subway cars in Delhi.

7 thoughts on “Is City Council tendering all the contacts it should?”