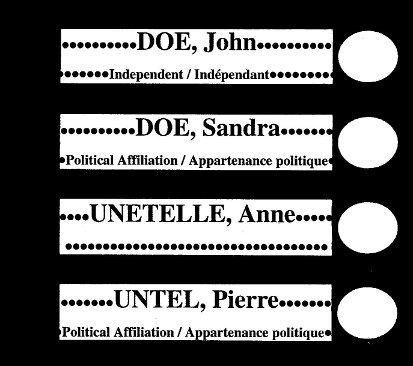 On Sunday April 9, 2011 History Television began a mini-series about the Kennedy’s. The first instalment focused on John Kennedy’s rise to the presidency of the United States. Kennedy’s first foray into Federal politics was when he ran for Congress in Boston. In any case, (whether this is true of not), according to the show, in Kennedy’s first campaign he was running against two Joseph Russos – the name Joseph Russo appeared twice on the ballot. (Presumably there was another Joseph Russo in that district.) This meant that those who wanted to vote for their Joseph Russo did not know how to indicate that their vote was for their preferred Joseph Russo. The Joseph Russo vote was split and the name John Kennedy (if not the man himself) received the largest number of votes. Because of the second Joesph Russo, John Kennedy was “victorious”. This incident is also described in an excellent article by the journalist Seymour Hirsch. END_OF_DOCUMENT_TOKEN_TO_BE_REPLACED

“To get good people to run for public office, you don’t need to offer them more money, benefits or enhanced job opportunities after politics. Instead you need to offer them the freedom to be themselves, the opportunity to make a difference and a hope that, while they may fail, they have the chance to make the world a better place.”

The spectacle last May of Ed Broadbent and Jean Chrétien meeting to discuss noncompete and/or coalition agreements between the NDP and the Liberals dismayed me. END_OF_DOCUMENT_TOKEN_TO_BE_REPLACED

Volunteers from unions and corporations are priceless! For everything else there is Mastercard!

“Secondment” = the temporary transfer of an official or worker to another position or employment: he spent two years on secondment to the Department of Industry

City of Toronto by-law 1177-2009 prohibits unions and corporations from making “contributions” to an election campaign.

– defines money, goods and services as a contribution; and

– deems the value of services provided by an employee to a campaign to NOT be a “contribution” provided that the employee works under the direction of the  candidate and does not receive pay over and above what he would have received as an employee in any event. END_OF_DOCUMENT_TOKEN_TO_BE_REPLACED

Is City Politics Moving Towards Party or Collaborative Politics?

“Mayoral candidate Joe Pantalone threw his support behind like-minded political rookie Mike Layton, who in turn did the same as candidates build the alliances they hope will bolster their chances of winning on Oct. 25.

Mr. Pantalone, an NDP supporter, said he intends to endorse “a lot of ” candidates vying for council and not just those with left-leaning ties.

“Obviously, people will have to agree to certain rules of engagement like you would in any team that you put on a field, but differences are fine,” Mr. Pantalone, the city’s deputy mayor, told reporters yesterday during a joint news conference. Mr. Layton, the son of federal NDP leader Jack Layton, is running in the downtown Trinity Spadina ward that Mr. Pantalone currently represents.”

The 2010 election is generating much discussion about the way in which the political process works. As you know, at least in theory, political parties are not allowed to officially run candidates in elections. That has not stopped them from endorsing candidates,  nominating candidates to run on a Party Platform and working on the campaigns of NDP candidates. The NDP has been particularly active in endorsing and nominating candidates. For example, Jack Layton was in 1991 the official NDP candidate for Toronto mayor. END_OF_DOCUMENT_TOKEN_TO_BE_REPLACED

The media is the message

“The basis of our governments being the opinion of the people, the very first object should be to keep that right; and were it left to me to decide whether we should have a government without newspapers or newspapers without a government, I should not hesitate a moment to prefer the latter. But I should mean that every man should receive those papers and be capable of reading them.” –Thomas Jefferson to Edward Carrington, 1787. ME 6:57

A free press plays a vital role in a democracy. It is essential that governments be open to investigation and criticism. Furthermore, competing free presses are even better. We need the Toronto Sun to balance the Toronto Star. The press is important. But, the citizens must keep the press honest. We cannot allow the press to behave in a way that undermines the democratic process. The press can undermine the democratic process through acts of omission. Consider the following … END_OF_DOCUMENT_TOKEN_TO_BE_REPLACED

Members of the cast and co-creators of the TV show She’s the Mayor strike a pose on the set in Toronto April 21. In front are Tonya Lee Williams and Colin Mochrie; at rear are co-creators Jennifer Holness and Sudz Sutherland, principal actress Janet-Laine Green (seated) and Min Sook Lee.

To wary citizens they are loose, crude and loud. To comic writers, the cast of characters starring in Toronto’s wild political scene is pure gold. END_OF_DOCUMENT_TOKEN_TO_BE_REPLACED

This is an interesting article – thanks for writing it.

1. Democracy is not a spectator sport. It requires participation and requires the electorate to assume the responsibility of voting. We have the City Council that we do because of low voter turnout. Nobody should complain about City Council if they didn’t bother to vote. END_OF_DOCUMENT_TOKEN_TO_BE_REPLACED

I understand that this article describes the pensions for MPs. Nevertheless, the principle applies to elected representatives of all types.

In 75 days, another 75 MPs will join that most exclusive of retirement clubs by qualifying for the safest pension on the planet. END_OF_DOCUMENT_TOKEN_TO_BE_REPLACED

Check out the comments.

Candidate Cadigia Ali — fluent in four languages — wants to speak for the “voiceless” on city council.

Meeting with Cadigia Ali is like taking a long, cold drink of water in the dead of summer up in Rexdale, nothing but steaming concrete all around.

Three women, all running for council. They quench a parched brain: despite a brittle mayoral race, passion for the city spurts elsewhere. END_OF_DOCUMENT_TOKEN_TO_BE_REPLACED

Posted on March 8/10 by Hilary Clark – The Agenda

Barely half of eligible Ontarians voted in the last province election. That looked respectable compared to turnout in Toronto’s last municipal race: just two out of five eligible Torontonians bothered make their mark in 2006. Sinking numbers at the ballot box seems to be hitting all levels of government in most establish western democracies. Should it be understood as apathy, alienation or, conversely, that people are so happy with the way things are they just don’t have anything to say? Tonight’s broadcast considers a different possibility. The nuts and bolts of elections matter to voter turnout – from who gets to cast a ballot, to where it’s cast and how it’s tabulated, to how many times a person can stand for office. END_OF_DOCUMENT_TOKEN_TO_BE_REPLACED